One group of workers in the UK recognised as being some of the most vulnerable to asbestos exposure were shipbuilders and dockyard workers. In the last few decades the seamen who lived and worked aboard these ships have been found to have an increased risk of developing life-altering diseases caused by asbestos exposure. 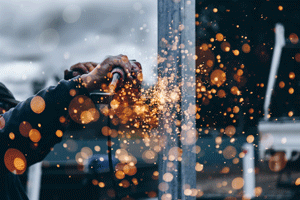 Many hundreds of thousands of mechanics, engineers and the crews of both naval and commercial vessels were at risk of exposure to harmful asbestos dust and fibres.

Research suggests that those who worked aboard commercial ships in the Merchant Navy could be at an even greater risk of developing the incurable asbestos-related cancer mesothelioma.

In the 1960s, research carried out in dockyards around the coasts of England consistently recorded some of the highest fatality rates of both asbestosis and mesothelioma in the UK.

Around 5% of tissue samples surveyed from dockyard populations showed abnormalities in the tissue of the lungs and pleura (the lining of the lungs), most likely to have been caused by the inhalation of asbestos.

Merchant seamen among the vulnerable

Over 300 types of insulation products containing asbestos were widely used to line machinery throughout the ships.

Since the 70s, increased asbestos awareness surrounding long-term health risks and deadly asbestos-related diseases led to the recognition that, just like naval servicemen who often slept in bunks surrounded by asbestos-lagged pipes, merchant seamen were also extremely vulnerable to inhaling asbestos dust and fibres aboard the ships. 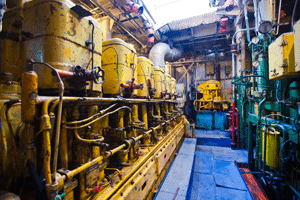 Investigations in recent years have discovered that the danger of asbestos exposure on commercial ships was largely ignored for years after the 50s and 60s when the incidence of mesothelioma among workers in asbestos manufacturing industries started to raise concern.

Research has found that attention towards merchant seamen exposed to asbestos dust and fibres and the health risks only began in the late 70s and early 80s.

During the 90s, rates of pleural mesothelioma and lung cancer among merchant seamen began to rise, causing researchers to find links between asbestos exposure on commercial vessels and these cancers.

Although tests found the levels of asbestos exposure during routine repairs aboard commercial ships was likely to be low, the data found was enough of a warning to the Merchant Navy and the wider shipping industry, leading to increased precaution to prevent asbestos exposure.

This means that inhaling even a single asbestos fibre could potentially cause mesothelioma.

Those who worked or sailed for the Merchant Navy were at a higher lifetime risk of pleural mesothelioma, including those who repaired or later decommissioned the ships.

On-board, where being in close quarters with poor ventilation increased risk of asbestos inhalation, nobody was safe from exposure.

If you or a loved one is ever diagnosed with mesothelioma or another asbestos-related condition, or you were part of the Merchant Navy and worried about asbestos exposure, don’t hesitate to get in touch with the National Asbestos Helpline. We’re here to help you with advice about your condition and can also advise on any benefits and/ or compensation you might be entitled to. Call us on Freephone 0800 043 6635, or email enquiries@nationalasbestos.co.uk.

What is the difference between mesothelioma and asbestosis?