A former soldier and rigger diagnosed with the crippling lung disease, asbestosis, appeals for help from Manchester’s former Shell UK workers who may know about the presence of asbestos dust at the Carrington refinery during the 1970s and 1980s.

Michael McGarry, known as ‘Skip’ when he worked for Shell UK, from Partington in Manchester was diagnosed with the lung disease asbestosis in the summer of 2014.

Asbestosis affects people exposed to high levels of asbestos over many years. Once inhaled, the asbestos fibres lodge in the lungs and permanently damage the air sacs that supply oxygen to the blood stream.

In serious cases it can severely restrict breathing and leaves sufferers with breathlessness, chest pains and coughing after only gentle activity. There is no cure.

Michael, aged 61, has fought back from a major stroke and heart surgery only to be faced with asbestosis, which significantly limits his quality of life.

Michael says: “At one time I could stand all day in a field with my two dogs but now I can’t because I’m so out of breath. If I walk for the paper I have to pace myself and lie down when I make it home. I can no longer travel abroad or hold a driving licence. Patricia, my wife, has to do everything; all the cooking, cleaning, gardening and go to work. I can just about make a cup of tea but that’s about it.”

With the support of the National Asbestos Helpline and Birchall Blackburn Law, Michael and Patricia are appealing to former Shell UK workers from the Carrington refinery to help the family make an industrial disease compensation claim to secure justice and the care that Michael needs.

Michael, or ‘Skip’ as he was known, worked as a rigger for Shell UK in Carrington from about 1977 to 1985. The Carrington refinery was as big as a village and split into west, east and central sites. Michael worked within the oldest central site were thousands of asbestos-lagged pipes ran throughout the refinery.

As a rigger Michael’s job was to put in place pipes and machinery, remove old pipes and equipment, put up scaffold and remove asbestos from pipes that were to be repaired. He worked close to laggers who also stripped out the old asbestos insulation from around the pipes.

Michael says: “My worst exposure to asbestos dust was when I worked below the laggers on the scaffolds and gantries as they removed asbestos from the pipes. The asbestos fell on top of me like snow falling from the sky. It completely covered me.”

Joan Kennedy, an asbestos-disease specialist solicitor with Birchall Blackburn Law, says: “To help Michael and Patricia we need to hear from former Shell UK workers from the Carrington refinery who may have been fitters, laggers, riggers or simply familiar with the sites. Former employees during the 1970s and 1980s may have vital information about the presence and use of asbestos within the Carrington refinery.”

Jan Garvey, from the National Asbestos Helpline, says: “We talk to people, like Michael and Patricia, every day. They’re looking forward to a hard-earned retirement but suddenly face illness and uncertainty. Sadly, the asbestos legacy continues to destroy people’s lives but if we can secure some form of help and support for sufferers it means the world to them. They can pay for extra care, equipment, aids and secure their family’s future.”

Anyone who knows about the presence and use of asbestos at the former Shell UK refinery in Carrington during the 1970s and 1980s, please call Joan Kennedy from Birchall Blackburn Law on 01244 684 475 or Jan Garvey at the National Asbestos Helpline on freephone 0800 043 6635. Alternatively, email jxkennedy@birchallblackburn.co.uk. Your details will remain confidential. 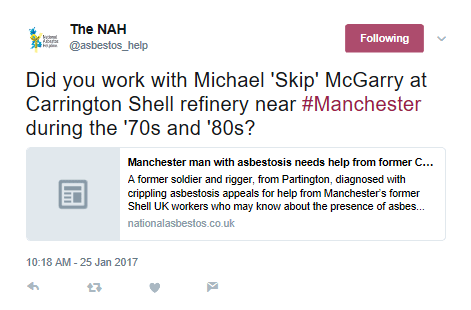