Asbestosis is a lung condition caused by inhaling high levels of asbestos dust. The asbestos fibres permanently damage the alveoli (air sacks which supply oxygen to the blood stream) in the lungs. 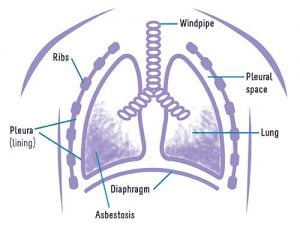 It is a form of interstitial fibrosis (or pulmonary fibrosis) where the lung tissue becomes thickened and stiff over a period of time due to the presence of asbestos fibres. The development of the scar tissue is called fibrosis. As the lung tissue becomes scarred and thicker, the lung loses its elasticity and ability to transfer oxygen into the bloodstream. As a result, the brain and other organs do not get the oxygen they need. The condition can make it more difficult to breathe.

A person is at risk of developing the lung disease if they have been subjected to prolonged asbestos exposure. Those who have worked as laggers, pipe fitters, electricians, dockworkers, engineers, joiners, plumbers, welders, builders, fitters and heating engineers are generally thought to be at risk of high asbestos exposure but this list is not exhaustive. People who have worked in power stations, shipyards, railways and factories – whatever their occupation – may also have been exposed to enough asbestos dust to develop asbestosis. 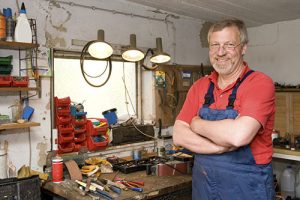 What are the symptoms of asbestosis?

The symptoms can take between 10 and 50 years to develop and the severity of the condition varies significantly from individual to individual. It can badly affect a person’s daily life, and in some cases asbestosis will impact on a person’s life span.
The disease usually progresses slowly and, in many cases, will remain stable. In rare cases, deterioration can be more rapid but there is a no reliable way of predicting its progress.

It is possible to have a degree of asbestosis and not suffer from any ill effects, but the most common symptoms include:

Other serious symptoms can develop in rare cases. These can include:

How will asbestosis affect my life?

The severity of asbestosis symptoms will depend on the length and amount of asbestos exposure. There is no cure for asbestosis once it has developed, because it is not possible to repair lung damage caused by asbestos fibres, but the symptoms can often be managed. In many cases the condition progresses slowly or not at all.
Asbestos fibres remain in the lung for long periods and the condition continues to develop many years after the exposure to asbestos has stopped. Given that the development is slow, an otherwise healthy person might not develop any significant disability. In more severe cases, asbestosis can place a significant strain on a person’s health.

Asbestosis does not require any specific drug treatment other than managing symptoms to improve quality of life. Examples include gentle exercise, a balanced diet and breathing techniques. For patients with severe symptoms certain treatments can help, such as oxygen therapy.

Unfortunately, asbestosis also carries an increased risk of developing a malignant condition, such as mesothelioma or lung cancer. The condition is an indication that a person has been affected by asbestos dust and fibres and anyone diagnosed with asbestosis should receive regular checks.

The Health and Safety Executive have reported that deaths from asbestosis are continuing to increase and in 2010 there were 412 deaths where asbestosis is likely to have been a contributing cause, compared with 109 in 1978. There were 169 deaths in 2010 where asbestosis was specifically recorded as a cause of death.
How is asbestosis diagnosed?

Diagnosing a person with asbestosis can take a significant period of time because interstitial fibrosis (or pulmonary fibrosis) has a number of triggers that the treating doctor will need to consider. Asbestosis is usually indicated after establishing the following:

If you or a loved one is ever diagnosed with asbestosis or another asbestos-related condition, don’t hesitate to get in touch with the National Asbestos Helpline. We’re here to help you with advice about your condition and how to cope with it, and can also advise on any benefits and/ or compensation you might be entitled to. Call us on Freephone 0808 223 0726, or email enquiries@nationalasbestos.co.uk.

What is idiopathic pulmonary fibrosis (IPF)?