The grieving widow of Nottingham man, Brian Savage, is asking for help from his ex-colleagues to establish where he could have been exposed to asbestos dust.

Brian died in February of this year from a terminal lung cancer called mesothelioma, which is caused by breathing in asbestos dust. 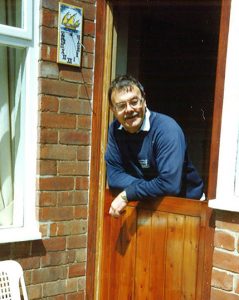 His widow Liz and his family are appealing to his ex-colleagues who may have information about the use of asbestos at Stanton Iron Works between 1953 and 1955, Ratcliffe Power Station in Nottingham in the early 1970s, or Plessey Ltd in Beeston, where Brian worked for about 30 years from the early 1970s.

Liz says: “We’re just hoping someone can help. The power station and telecoms businesses were big companies and a lot of people knew Brian, but we lost touch with his colleagues because they’ve retired and moved on to new lives.

“When the consultant told us that Brian had mesothelioma I said, ‘No, I don’t think so!’. Not Brian. He wasn’t involved with asbestos. But he had been exposed to it, so many people have been affected, it’s just so difficult to know where.”

Asbestos was widely used within manufacturing, engineering and construction for its fire resistant and insulating properties before it was phased out and banned in the 1980s.

While at Stanton Iron Works, Brian was a young manual worker in a foundry and would come home covered in dust or during his time at Ratcliffe Power Station, Liz remembers that Brian had climbed to the top of cooling tower which would have been insulated by asbestos. And at the telecoms manufacturer, Plessey Ltd, Brian regularly went to the shop floor to chase orders of telephone circuit boards, which in those days were often made with asbestos.

Brian was already being treated for bowel cancer at the local hospital when they were told in 2012 that he had a growth on his lung and it was related to asbestos exposure. As well as continuing chemotherapy, the doctors treated Brian’s lung cancer by draining his lungs of the build-up fluid – a symptom of the cancer – when his breathing became difficult.

Liz says: “I was just so surprised and it took time for me to realise how bad and dangerous mesothelioma is. I thought that the hospital would just keep draining Brian’s lung of fluid and we’d be okay but he deteriorated quickly.”

Brian had been active all his life and was enjoying retirement. He was a great walker and the couple were members of a walking club, he loved his gardening and socialising but all that changed dramatically. He died seven months before his 80th birthday leaving three daughters and four grandchildren.

Liz would like anyone with information about the use of asbestos where Brian worked to contact Jan Garvey at the National Asbestos Helpline on freephone 0800 043 6635 or email jan@nationalasbestos.co.uk. Your details will remain confidential.