One of the BBC’s biggest crime dramas aired last week, drawing in well over 5.9 million viewers overnight, and had a very serious theme. The show gave viewers an insight into the deadly world of asbestos and the suffering it causes. 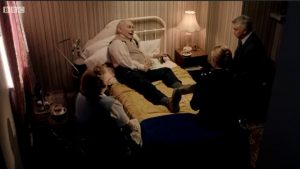 This episode of the BBC1 crime drama Inspector George Gently, set in 1969, raises very important issues around asbestos exposure and how many industrial companies tried to cover up the facts of asbestos.

Although set in the past, the BBC have used the story of this Inspector George Gently episode to highlight a very important and contemporary issue with modern life – the exposure to asbestos and the deadly diseases it can cause.

Joining the regular cast for this episode was a character played by Lesley Nicol, who is best known for her role as Downton Abbey’s resident cook, Mrs Patmore. 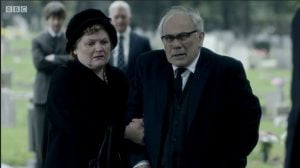 “I play a lady called Bridget – she has already lost her only child to mesothelioma – and she is now watching her husband losing his battle with the same disease,” explains Lesley. “They have both been exposed to dangerously high levels of asbestos in the factory where he has worked for many years.”

Characters in the episode recall playing in the ‘white snow’ that fell in Easterhope, where the story is set, and it came from the factory’s chimneys. The ‘snow’ was asbestos and some of the real people that  the National Asbestos Helpline talks to recall exactly this sort of thing happening if they lived close to factories that work with the deadly mineral.

The program reminded the team at The National Asbestos Helpline of hundreds of similar cases they have dealt with through the years, and particularly a specific case when we helped a client from Leeds who had been born, went to school and lived near an asbestos factory where children played around the bales of asbestos. This led to their exposure to asbestos and our client unfortunately later died from the asbestos related disease, mesothelioma.

The issue is very much happening around us right now, and is not just a problem confined to the 1960s. Figures from the Health and Safety Executive show that more than 2,500 people are diagnosed with pleural mesothelioma in the UK each year and according to the Department for Health and Pensions, 53,000 people will die from pleural mesothelioma between 2013 and 2037.

Unbelievably, there are still attempts to ignore and hide the fact that asbestos has lethal side effects. Even today, the pro-asbestos lobby wields great power in many countries. The world leaders in asbestos production include Canada, Russia, China, Brazil and Kazakhstan. Producers from these countries are aggressively pushing asbestos as a wonder material and are playing down the dangers of asbestos in developing nations where affordable building materials are in big demand.

The global pro-asbestos lobby strongly promote the differences between the six types of asbestos minerals. Chrysotile, also called white asbestos, is promoted as a safe form of asbestos because its fibres are curly and more flexible than the other more jagged and sharp forms of asbestos. The lobby and its supporters say the shape of its fibres makes it safe, but scientists and medical professionals overwhelmingly agree that inhaling any form of asbestos can lead to terminal diseases including mesothelioma and lung cancer, or other debilitating ailments such as asbestosis and pleural thickening.

A Sunday Times article, headlined ‘Scientists track down a killer dust disease’, was published in 1965 and highlighted that low occupational exposure was a major concern.

In 1968 the government set limits to the amount of asbestos any individual could be exposed to, which were set after the Asbestos Regulations 1968 by HM Factory Inspectorate to give guidance to employers. The limits still allowed employers to expose their workers to significant amounts of asbestos.

It is not known why these limits were set, even when it was known that even low levels of occupational exposure to asbestos was extremely harmful and a major concern. There is little doubt that the article would have been widely read by members of the HM Factory Inspectorate and employers. It has been confirmed by specialists in the health field that there is no known minimum level of asbestos exposure which is “safe” for an individual to be exposed to, so why did the government allow the passing of this set limit?

Many business owners and important figures in government at the time would have read the article, yet they still did nothing for the safety of their employees and workforce. In some cases, as described in the Inspector George Gently episode, people even tried to cover up the fact that they were still allowing their employees to come into contact with dangerous levels of asbestos.

Cases of asbestos related diseases caused by low-level exposure to asbestos will only increase in number. Dr Robin Rudd, a leading medical expert on asbestos disease, has stated that mesothelioma ‘can occur after low level asbestos exposure and there is no threshold dose of asbestos below which there is no risk’.

This episode of Inspector George Gently is extremely important in raising the awareness of asbestos exposure and asbestos related diseases, as have other programs about the issue in the past.

Greater awareness from the public about the potential danger they or their loved ones might be in at work or in the environment can help to raise the awareness of mesothelioma and other asbestos related diseases.

Currently, the research into treatments for these deadly diseases is underfunded and very rare, but public awareness, such as the spotlight on TV, will help significantly. Right now, the British Lung foundation is trying to change this by campaigning for sustainable funding for mesothelioma research.