The grieving family of a former carpenter from Gravesend is calling on people found to have lung cancer to check their employment history for asbestos exposure.

Philip Shepherd lost his father, Brian George Shepherd, to lung cancer in July 2012 at the age of 79. It was not until after Brian’s death that a post mortem found tumours in his lungs and an inquest ruled that the most likely cause of the cancer was asbestos. 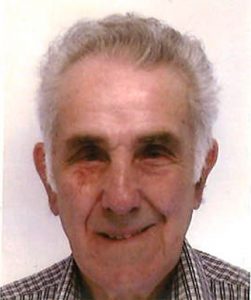 The family would never have known to check Brian’s work history for potential asbestos exposure until his wife, Eileen, saw an article in the local GP’s surgery about its widespread use and deadly effect.

Philip has now joined forces with The National Asbestos Helpline to ask health professionals and lung cancer sufferers to check whether asbestos exposure could be the cause of their lung cancer.

Philip says: “We’re seeing just the tip of the iceberg. Thousands of people are dying from asbestos exposure and they don’t even know because it’s assumed other factors – like smoking – have caused their lung cancer.

“Dad was a carpenter and loved his job. He used to come home covered in dust head-to-toe but no-one knew. The deterioration in him in his last few months was devastating. Asbestos kills good, hardworking people. It’s a nasty, nasty disease and it’s very hard to come to terms with. We miss and adore him so much. It’s been very difficult for us to come to terms with.”

Brian was exposed to asbestos whilst employed by two ceiling fitters. From the 1960s through to the 1980s ceiling tiles were made using asbestos because of its fire resistant and insulating properties. As Brian worked, the tiles would have been cut to fit and the deadly asbestos dust released into the air he was breathing.

More than 700 cases of lung cancer are diagnosed every year in Kent and Medway, based on statistics from the National Cancer Intelligence Centre. The National Asbestos Helpline claims that asbestos must be playing a bigger part in those 700 cases – 14 diagnosed every week in the region.

Carl Griffiths, from the National Asbestos Helpline, says: “We want people to be aware that asbestos can also cause lung cancer and to consider whether they have been exposed. It’s important they discuss their work history and possible exposure with their GP or consultant, and get it on record. It could make all the difference to their level of care and making provision for their family’s future.”

Although smoking increases the risk of lung cancer by up to 10 times, the combined effect of smoking and working with asbestos can increase the risk by up to 50 times. People who worked in construction between the 1950s and 1980s were at risk of exposure to asbestos and developing a related illness 10 to 50 years on.

The National Asbestos Helpline takes more than 3,000 calls a year from people looking for advice, support and guidance about asbestos and its consequences.