Memories of those affected by asbestos

At the National Asbestos Helpline, we receive many accounts of how individuals and their families were exposed to asbestos and the devastating consequences.

The accounts give us an insight into the past and are a record of British working conditions from the 1950s through to the 1980s. Some of the stories paint vivid pictures of loved ones and can be quite emotional. They often tell of years of hard work and long hours in conditions some of us could not even imagine.

With the permission of the writers, we hope to share some of these stories and accounts with you.  As well as giving you an idea of how terrible asbestos can be, the stories also show the humour, dignity and courage of asbestos victims and their families.

Our first account comes from a lovely lady from Didcot, whose late husband sadly died from an unknown lung condition, which turned out to be the devastating mesothelioma, a form of lung cancer caused in the vast majority of case by asbestos. Her husband spent many years working for British Rail and even worked on a certain famous locomotive.

“My late husband passed away in April 1991 aged just 56 years. The coroner diagnosed mesothelioma as the cause of his death, needless to say I had never heard of this at that time.

My husband was employed by British Rail when he left school at 15 years of age, firstly as a cleaner on steam engines in 1950. After a long apprenticeship he became a ‘second man’ and then a ‘driver’.

He still drove steam trains long after diesels were the norm.” 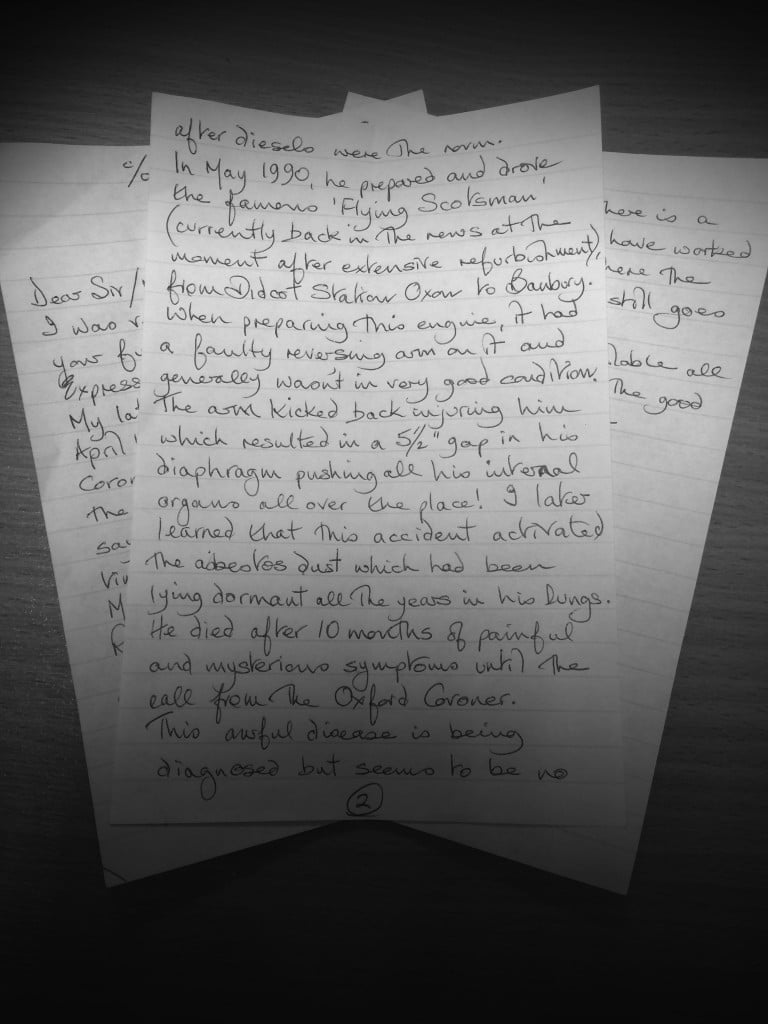 “In May 1990, he prepared and drove the famous Flying Scotsman from Didcot to Banbury. When preparing this engine, it had a faulty reversing arm on it and generally wasn’t in very good condition. The arm kicked back, injuring him, which resulted in a 5½ inch gap in his diaphragm pushing all of his internal organs all over the place. I later learned that this accident activated the asbestos dust which had been lying dormant all of these years in his lungs.

He died after 10 months of painful and mysterious symptoms until the call from the Oxford coroner.

This awful disease is being diagnosed, but there seems to be no cure.

It’s nice to hear that there is a helpline for people who have worked in so many industries where the asbestos curse was and still goes on affecting people.

None of this help was available all these years ago, so keep up the good work you are doing for unsuspecting people.” Mrs Ayers

If you think that you or a loved one has a story to tell about worked with asbestos or how you have been affected by it, we would very much enjoy hearing from you. With your permission, we will share them online for others to read.

If you would like to get in touch about sharing your story, please contact Jan Garvey by emailing jan@nationalasbestos.co.uk.