The National Asbestos Helpline has been running a UK-wide awareness campaign highlighting the help available to people living with an asbestos-related disease.

The national newspaper campaign ran from November 2014 to June 2015. Its aim was to encourage people with concerns about past asbestos exposure, or anyone suffering from symptoms relating to asbestos lung conditions, to get in touch and seek help.

The campaign resulted in more than 2,600 calls to the National Asbestos Helpline from worried members of the public looking for advice, information, reassurance and support. In many cases the National Asbestos Helpline was able to help callers diagnosed with an asbestos-related disease claim important benefits and compensation, which will prove vital to help pay for their on-going care. 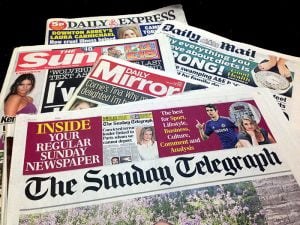 Within the health section of Britain’s national newspapers – such as The Daily Express, The Mail, The Sun, The Star and The Daily Telegraph – we highlighted who is most at risk, the main symptoms and the recognised asbestos-related diseases.

Who is most at risk?

Asbestos is a fibrous material, which was widely used in the construction, engineering, power and shipbuilding industries. When the fibres are disturbed and become airborne they are inhaled and damage the lungs. Prolonged and regular exposure to asbestos dust increases the risk of developing an asbestos-related disease – which can take between 10 and 50 years to show symptoms – but in some cases just one fibre can be enough to cause a lung cancer.

For many tradesmen, manual workers and engineers, asbestos exposure in the workplace will have been inevitable during the past sixty years due to its widespread use. Those who have worked as laggers, electricians, dockworkers, engineers, joiners, plumbers, welders, builders, fitters and heating engineers or in any factory where asbestos may have been present (e.g. power stations, shipyards, railways) are likely to have come into contact with asbestos dust.

It is also very important to consider the fact that any home or commercial building built before 2000 could contain asbestos within its structure. More and more people from other professions – like teachers, caretakers and office workers – are developing asbestos-related diseases after coming into contact with asbestos dust and fibres that were present within their workplace.

Cases also occur where family members have been exposed to asbestos dust from washing work clothes, or simply by contact with asbestos contaminated clothes. This is known as secondary exposure or ‘shake-down’ exposure.

Anyone exposed to asbestos dust is at risk of developing an asbestos-related disease, although the risk increases with the amount of asbestos exposure.

To help with early diagnosis, the National Asbestos Helpline campaign encouraged the medical profession to consider asbestos-related diseases during medical investigations and ask their ‘at risk’ patients, “Have you been exposed to asbestos?”

What are the main asbestos-related disease symptoms?

Through the newspaper campaign, we were able to highlight the main symptoms of asbestos-related diseases with a national audience. Often the public dismiss such symptoms as simply feeling a ‘little under the weather’ and fail to seek medical advice. We hoped the campaign would persuade more people with these types of symptoms to get checked out, sooner rather than later.

The main symptoms are:

Asbestos-related conditions are not always easy to diagnose. Often the patient will have more than one illness and the symptoms are associated with a great many lung diseases and other illnesses.

But, by highlighting the symptoms and who is most at risk, we hoped it would raise awareness with anyone reading the newspapers and encourage them to make the link between their symptoms and past exposure to asbestos dust and fibres. 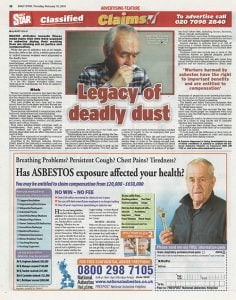 What are the recognised asbestos-related lung diseases?

Mesothelioma is an incurable type of lung cancer caused, almost exclusively, by exposure to asbestos dust and fibres.

Asbestosis occurs in individuals who have had exposure to high levels of asbestos over many years. The fibres permanently damage the alveoli (air sacs which supply oxygen to the blood stream) in the lungs.

Although there is no financial support for people diagnosed with pleural plaques in England and Wales, the newspaper campaign encouraged individuals diagnosed with the condition to get in touch and register on our Pleural Plaques Register [link]. We were able to reassure the caller about the condition, encourage them to regularly check their lung health and tell them not to worry.

If a person has been diagnosed with pleural plaques and was exposed to asbestos in Scotland or Ireland, or worked for a Scottish or Irish company, then they may be able to secure some financial support. We encourage anyone to get in touch if this is the case.

As part of the campaign we were also able to offer free copies of our information booklets that outline the symptoms, treatments and support available to people diagnosed with mesothelioma, asbestos-related lung cancer, asbestosis and pleural thickening. Anyone who would like to order their free copies should send us an email enquiries@nationalasbestos.co.uk or give us a call on FREEPHONE 0808 250 6773.