Today is Carer’s Rights Day and we thought it would be fitting to tell you about Sue Stephan and her mum, Sally Martin.

Sue cared for her mum for seven years after she was diagnosed with Idiopathic Pulmonary Fibrosis (IPF). The condition is a debilitating, progressive and terminal lung disease with no known cause. 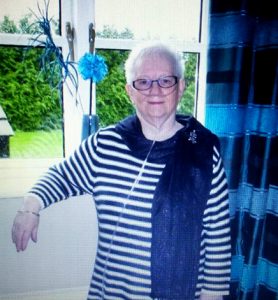 When you talk to Sue there are three things that you notice immediately. Firstly, her wonderful sense of humour and timing.

Secondly, she is an expert on Interstitial Lung Diseases (ILD). This is an umbrella term that covers many different types of lung conditions but the most common of these is IPF. Sue reels off complicated medical terminology like she is a hospital respiratory consultant and after seven years there is nothing she does not know about the drugs, doses and home oxygen treatment.

Thirdly, if you try and talk to Sue about her life, within a minute she will change the subject to her mum’s life.

“It’s always been my mum and I,” she says. “Caring for her came naturally and it just snowballed. You don’t realise how much you do until it stops, but she was my mum and I didn’t even think there was any other way.”

We got to know the amazing and inspiring Sally and Sue through their West Cheshire Interstitial Lung Disease Group. They set up the group after discovering that there was no support or place to go for people with similar lung diseases in the area. Initially the group was a focus for IPF but quickly developed to include other lung conditions, like the asbestos related-diseases mesothelioma and asbestosis.

It is a vibrant and informal group that offers emotional and practical advice about ILD, but primarily it is a chance for people, who are rarely able to leave their homes, to socialise and natter about nothing and everything.

Sue says, “Mum got a real buzz from the group. It’s very hard to get out and meet people when you’re carrying an oxygen tank to help you breathe. It gave us a chance to talk to other people about how you cope, access to benefits, oxygen safety and literally everything else. She did have a real laugh with everyone in the meetings.

“When my mum was admitted to hospital for the last time we discussed the future of the group. I said that I didn’t think I could carry on but she asked me keep the group going for her – and I have.” 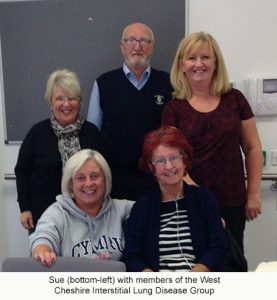 Sally was an active lady and ran the local flower shop before being diagnosed with IPF. She held down two jobs to make ends meet while Sue was growing up. But when Sally’s lung condition started to take hold she found that she could no longer do the everyday things she used to. It was exhausting bending down to pick up something she dropped or simply standing at the cooker to make dinner. It especially upset Sally that she could no longer tend to her garden.

Sue gradually took up her mum’s everyday activities until eventually she was planning and thinking for two people. She could not go far from home or leave her mum for too long and was always on alert in case something happened. As a result her own life was put on hold and she would only take four nights off a year to get some respite.

Even now that Sally has passed on and Sue is no longer a carer, it may be a long time before she can talk about her own life again.

Sue say, “My mum has been my life for the past seven year and you can’t just change back. It’s going to take a while. I woke up the other morning and got her cup out to make her a cup of tea… A part of me still thinks my mum is here.”

If you suffer from or are affected by an interstitial lung disease of any kind, the doors of The West Cheshire Interstitial Lung Disease Group are open to you every second Tuesday of the month between 1pm and 3pm at The Rock Surgery, 2 Princeway, Frodsham, Cheshire WA6 6RX.