Research studies suggest that a cool draft of air from a handheld fan can help reduce the feeling of breathlessness in a patient.

The study, ‘Does the use of a handheld fan improve chronic dyspnea? A randomized, controlled, crossover trial’ (2010), recommends the technique as part of a palliative management strategy for reducing breathlessness associated with advanced disease.

The study supports anecdotal evidence that a handheld fan directed to the face reduces the sensation of breathlessness.

Ruth Thomas, Specialist Respiratory Nurse based in Milton Keynes, says: “I frequently use handheld fans during pulmonary rehabilitation sessions, giving them to patients who are very breathless after a cardiac exercise, aids recovery time even quicker than use of inhalers. Patients who benefit are advised to use as needed whenever more breathless than usual to help regain breathing control.”

The same relief can be replicated by desktop or standing fans, an open window or a cool flannel compressed against the face. 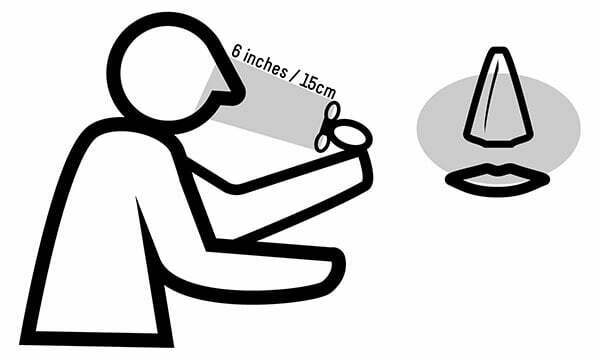 How to use the handheld fan to relieve breathlessness?

It is important to check with a GP, respiratory consultant, respiratory nurse, respiratory physiotherapist or other qualified medical professional before a patient uses the fan technique.

When a patient feels breathless after any physical activity, anxiety or stress they should:

It may benefit the patient to use the fan while employing other methods of breathlessness management such as breathing techniques, relaxation and mindfulness. The fan technique can also be used at the same time as nasal oxygen.

There are on-going studies and further research projects investigating the effectiveness of the technique and how it works. At the moment it is thought that cooling the cheeks, nose and mouth sends a message to the brain which reduces the feeling of breathlessness. It may stimulate a similar response as to when people dive into cold water, prompting the body to conserve oxygen.

Whatever the reason why the handheld fan technique works and eases breathlessness, it is a safe and simple way to help patients. The fans are inexpensive, portable, enhance self-efficacy and give the patient some sense of control over their breathing.

Breathlessness is a key symptom of the asbestos-related diseases pleural thickening, asbestosis, pleural fibrosis, lung cancer and mesothelioma. Simply walking from one room to the next or tying a shoelace can leave a sufferer struggling to breath. It has a huge impact on the quality of life of sufferers and any safe technique that can help should be used to help patients.

With our knowledgeable, professional and compassionate approach, we help and support thousands of people across the UK to access financial, emotional and practical support and, where appropriate, legal representation from specialist asbestos compensation claims solicitors.