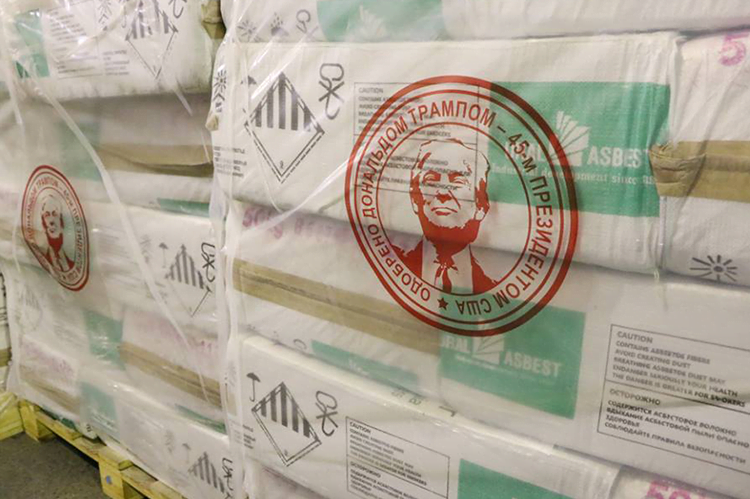 Donald Trump’s policies on the environment might have caused a stir throughout the US and across most of the world, but the president’s stance has earned him a stamp of approval from a Russian asbestos mining company, reports The Guardian.

The asbestos mining company, Uralasbest, is one of the world’s largest producers and sellers of asbestos, and has started decorating pallets of its product with a seal of Trump’s face along with the words “Approved by Donald Trump, 45th President of the United States”. 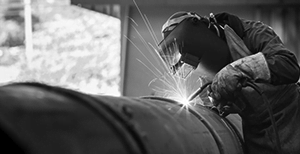 This news follows the US Environmental Protection Agency’s (EPA) decision not to ban new asbestos products outright. The EPA said it would evaluate new uses of asbestos, but many environmental groups have voiced criticism of the agency for not going further by barring the products on the grounds of public health.

The post also thanks Trump for supporting Scott Pruitt, the recently departed head of the EPA, “who declared that his agency would no longer deal with matters related to side effects potentially caused by asbestos”. It adds that Trump had previously called asbestos “100% safe after application”, which is completely untrue.

The city of Asbest, where Uralasbest is located, was once known as the “dying city” due to its high rate of lung cancer and other asbestos-related health problems.

Asbestos was once widely used around the world for insulation, roofing and other means, but is now classed by the US federal government as a “known carcinogen” due to profound evidence that, when disturbed, asbestos fibres can become lodged in the lungs and cause diseases such as mesothelioma, pleural thickening, and asbestosis, as well as cancers of the lung.

Trump, however, has voiced his support for asbestos, calling it “100 percent safe, once applied” in his 1997 book The Art of the Comeback. In the same book, he wrote: “I believe that the movement against asbestos was led by the mob, because it was often mob-related companies that would do the asbestos removal.”

Later in 2012, the then future president tweeted that the World Trade Centre “would never have burned down” after the September 11 attacks if asbestos hadn’t been removed from the building.

The National Asbestos Helpline condemns the words and actions taken by Trump and his administration for not doing enough to tackle the serious issues that surround asbestos, as we have seen first-hand the devastation and heartache asbestos causes to hard working people and their loved ones.

A full ban on asbestos products did not come into force in the UK until 1999, and the European Union’s deadline for member states to end its use was just 10 years ago. According to the Health and Safety Executive, asbestos can be found in any industrial or residential building built or refurbished before 2000.

“There is absolutely no doubt that all kinds of asbestos can give rise to [asbestos-related dieseases],” says Paul Cullinan, Professor of Occupational and Environmental Respiratory Disease at the National Heart and Lung Institute of the Imperial College London.

“It’s probably the case that white asbestos is less toxic in respect to mesothelioma than amphiboles. The industry tries to argue that you can take precautions so that white asbestos can be used safely, but in practice, in the real world, that is not what is going to happen.”