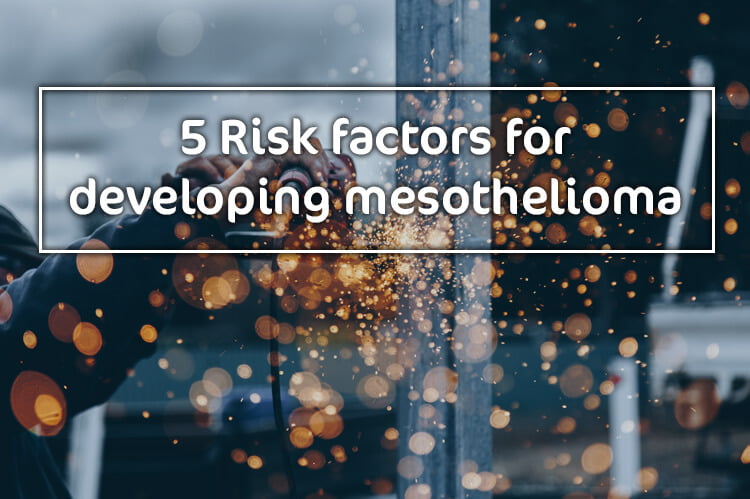 Mesothelioma is an aggressive cancer caused predominantly by inhalation of asbestos fibres. The main risk factor for developing mesothelioma is working in an occupation where there is a high risk of being exposed to asbestos, such as shipbuilding or heavy industry.

Mesothelioma deaths have greatly increased in the UK since the 1960s and there are now more than 2,500 deaths from mesothelioma every year.

Most diagnoses of mesothelioma are now thought to be caused by asbestos exposure prior to 1980 when the use of asbestos was widespread, particularly in the shipbuilding and construction industries.

There are several risk factors associated with asbestos and the development of mesothelioma, which are outlined below. 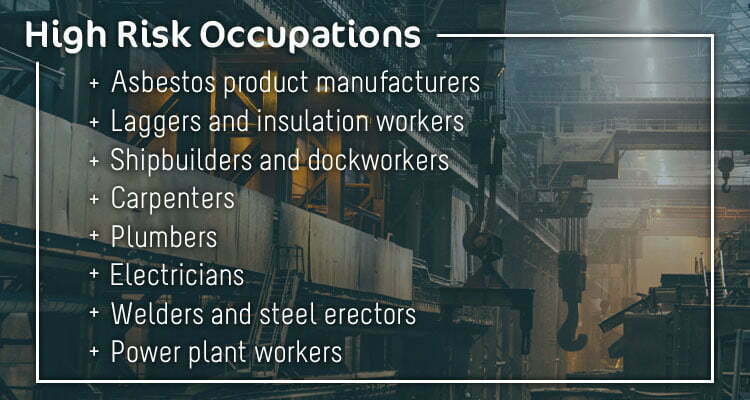 High risk occupations for developing mesothelioma are the jobs where workers were exposed to extensive amounts of asbestos dust over prolonged periods of time, and working with asbestos was one of their primary roles.

Workers would often be working with the raw asbestos fibres, mixing them with other materials to make a product. These products included asbestos sheeting, asbestos roofing, or asbestos insulation – known as “lagging”, which would be used in a variety of industries to protect piping, boilers and machinery from heat.

The people in these occupations described their working environments as always being extremely dusty, and the air around them would be so thick with asbestos dust it looked like snow.

Occupations that are considered low risk are those where workers would infrequently use asbestos containing materials, or there were asbestos products at the worksite itself.

Workers might be transporting pre-made asbetos products, working in warehouses where asbestos materials were stored or found in the building’s construction, or they might have to infrequently alter asbestos products, such as drilling and filing them to size.

In more recent years, there has been a strong link between mesothelioma and secondary exposure to asbestos. This secondary exposure usually arises when the family of a high risk worker are exposed to asbestos dust and fibres brought home unknowingly on the clothes or tools of their loved one.

The term “shakedown” exposure comes from the action of family members shaking overalls and clothes covered in asbestos dust to remove it while cleaning them. Shakedown exposure predominantly affected women married to or living with asbestos workers. It is also known for the children of these workers to have developed asbestos-related diseases after greeting their parents when they came home from work, hugging them and being exposed to this deadly substance.

People who lived in close proximity to industries with a heavy involvement with asbestos, such as asbestos processing plants and dockyards/ shipbuilders, would be at a slightly higher risk of developing mesothelioma than those who did not.

Areas surrounding asbestos processing plants often saw asbestos dust falling from the sky around the plants during periods of heavy activity. Machinery used to process the asbestos would often kick up a lot of the dust, causing it to gather in areas around the building.

With how prominent the use of asbestos was in construction throughout the 20th century, it comes as no surprise that the hazardous material can still be found in many buildings across the UK, both private and public.

There have been cases in recent years of doctors, nurses, teachers and even ex-pupils developing mesothelioma and other asbestos-related diseases following exposure to asbestos from materials in the buildings where they worked and spent many years attending.

There have been many calls for the government to remove asbestos from all public buildings, including schools and hospitals, due to the danger and risk that it presents, but so far they have stuck to their statement that asbestos is safe when kept in situ and is not damaged or disturbed.

If you have been diagnosed with mesothelioma or another asbestos-related disease, get in touch with us today for advice and support. Call one of our team on 0800 043 6635 or send an email to enquiries@nationalasbestos.co.uk.